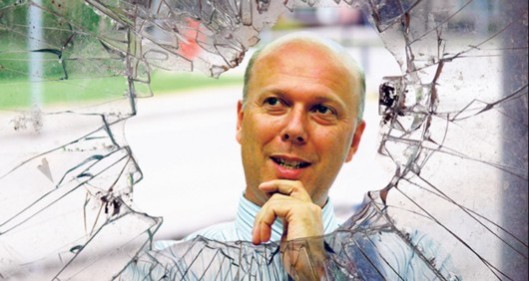 Scrounger: How this former DWP minister can claim to have been tackling skivers after he took more than £100,000 of taxpayers’ money that he didn’t need must be beyond the comprehension of those of us who really are honest and hard-working.

It’s funny how an old news story can be seen in a completely different light as events unfold.

Take this Mirror article from 2009, detailing how then-shadow ministers William Hague and Chris Grayling claimed £166,178 between them, in taxpayers’ money, to pay for accommodation.

Mr Hague, who was earning £800,000 a year from “part-time jobs”, according to the newspaper – and who among us would not like to have part-time work that paid so well? – pocketed £61,995 to pay mortgage interest and a £4,000-per-year service charge, including use of a gym, on a penthouse in London. Hecleared the mortgage in October 2009, just before MPs were forced to publish details of their expenses, the paper said.

Chris Grayling, now Justice Secretary, claimed £104,183 over six years for a London flat, despite having a family home just 17 miles from Westminster.

Add that money to the £100,000 we know George Osborne had from us, to pay mortgage interest and other expenses on his Cheshire farmhouse, paddock and other land there, and we can see that these three ministers alone have claimed more than a quarter of a million pounds – around £266,000 – that they didn’t need.

Now, they and their government are telling us that they can’t afford to pay us back £14 per week (the bedroom tax), even though the amount of our money that they have taken could pay it 19,000 times!

Having limited benefit uprating to one per cent per year for the next three years, they are telling people on Employment and Support Allowance they cannot pay the extra 67p per week that would mean a rise equal to inflation – even though the amount these three ministers alone have had from us – the taxpayers – would pay that amount 397,015 times.

They’re telling us they can’t pay the 84p extra that would bring Jobseekers’ Allowance up to inflation – even though their expenses claims would have paid it 316,667 times.

They keep telling us that the nation’s credit card is “maxed out” and the Treasury cannot afford to pay benefits to those with the least.

Isn’t it the truth that these super-rich millionaires have been taking all our money for themselves?