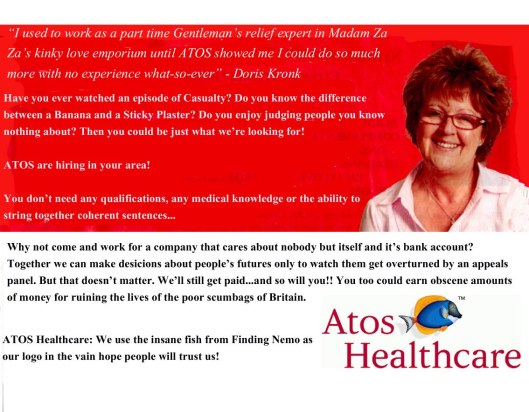 “Some of the worry experienced by claimants is as a result of adverse media coverage, and it risks being fuelled by incorrect anecdotal information, and indeed total myth,” said Mark Hoban, the Minister of State for Work and Pensions in response to a debate on the Atos assessment regime for claimants of Employment and Support Allowance.

“Let nobody in this House or beyond this House be in any doubt; there are no… targets… about who should be placed in which groups.

“It has also been suggested that Atos Healthcare professionals make decisions on benefit entitlement. They do not. Those decisions are made by DWP decision-makers.

“People say the number of decisions overturned at tribunal is evidence of poor Atos reports. When we asked judges why they overturned DWP decisions, they said an error in the Atos assessment was the primary reason for an overturn in only 0.3 per cent of cases… I’d like to get more information from the judges. We do need to get better feedback. [In most cases the overturn came from] fresh evidence being presented.

“It’s been suggested that GPs should make this assessment… Let me just quote what the BMA said about that idea. ‘It is not the GP’s role to provide any opinion on the patient’s capability to work as part of this process. It is vital that these two roles are kept separate and that GPs are not asked to provide an opinion on their patient for the purposes of receiving the Employment and Support Allowance. Doing so could damage the doctor-patient relationship’.

“The assessment give people with fluctuating conditions the opportunity to explain how their condition varies over time. This is not a tick-box assessment, as some have suggested. There is a discussion between the healthcare professional and the person undertaking the WCA to understand what their condition is, to understand how it varies over time. The questionnaire that customers are sent has been redesigned for this purpose… If a person can’t carry out a function repeatedly and reliably, they’ll be treated as unable to carry out that function at all.

“Of all the ‘fit for work’ decisions taken by the department, only 15 per cent are overturned on appeal.”

He went on to argue that the Work Capability Assessment is fit for purpose.

I wanted to quote his response to the debate because it failed, almost entirely, to address the consensus found by the debate, as summed up by Michael Meacher MP: “The current Atos system has irretrievably failed and it needs to be replaced by a wholly new and fair system.”

The reason it has failed is not because GPs should be making assessments, nor because assessors have targets about who should be placed in the ‘support’ or ‘work-related activity’ groups, or any of the other things Mr Hoban mentioned. It has failed because the thinking behind it is entirely inappropriate.

It has failed because the Work Capability Assessment is based on a model developed by a company called Unum, in order to make it harder for people to claim on their insurance. It has been adapted to make it almost impossible for sick or disabled people to make a successful claim for Employment and Support Allowance and it will soon be used as the basis for the government to stop people making a successful claim for the new Personal Independence Payment.

Mr Hoban said nothing about the new rules for Work Capability Assessments, being introduced without fanfare on January 28, that will allow assessors to imagine whether a claimant could do work, with the aid of specialist devices (such as a wheelchair) regardless of whether they actually have access to those devices.

In other words, people who are sick or disabled and claiming benefit are being forced to deal with people who refuse to consider their situation on any level other than that of a fantasy, created by the government in concert with powerful private-sector advisors.

In this fantasy, work is the panacea, the cure-all, for every illness. Its therapeutic powers are beyond question and the best thing possible is for every individual currently claiming benefit to get back into work. This assumption does not take account of at least two issues. Firstly, there’s not enough paying work for all the able-bodied people in the UK, never mind those with physical or mental health problems. Secondly, the assumption that work will make everything better simply isn’t true.

George Orwell once said that simplistic statements such as ‘work is always good for you’ are very rarely employed without the intent to deceive, and that is what seems to be happening here. In fact, modern working practices and conditions are likely to have contributed to the health problems exhibited by claimants (not ‘customers’ as Mr Hoban stated, giving away his sympathies with one word). This includes repetitive work, such as on a production line, work in hotels, retailing, hospitals, food processing and call centres. Governments have had data on the different effects of work according to occupation for years; they know that people in higher-paid and less physically strenuous professions are 31 per cent less likely to contract a long-term illness between the ages of 44 and 64. In the 1970s, mortality was twice as high for men at the lowest end of the work scale than the highest – and three times more likely now – in other words, the situation is getting worse.

But the government won’t hear of it. Fantasy.

This is why the Atos assessors don’t have to be doctors; they can be anyone who has been trained to operate the tick-box LIMA (Logical Integrated Medical Assessment) system. The Department for Work and Pensions does not want evidence of claimants’ actual health. It wants a nice story, telling them that this person can return to work. That’s why the ‘descriptors’ bear no relation to actual work activities. It’s about building up a fantasy about each claimant, that they are ‘fit for work’ after all – and then getting them off-benefit as quickly as possible.

For most people, that’s where the fantasy becomes a nightmare.

6 thoughts on “Persistent misdirection will perpetuate the Atos nightmare”