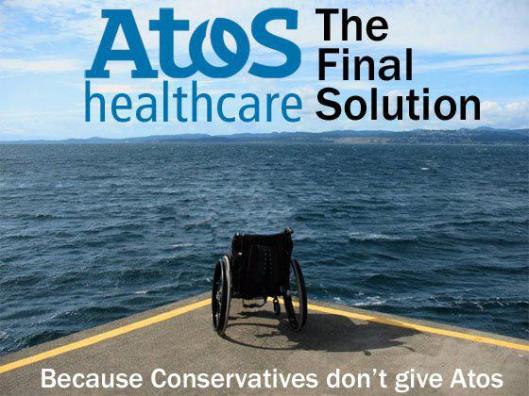 This image appeared on the internet shortly after the decision was announced, providing a visual response to the government’s alliance with Atos.

Not content with killing 32 Incapacity/Employment Support Allowance claimants every week, the Department for Work and Pensions has awarded the contract to test whether disabled people should continue receiving benefits to Atos.

The firm won contracts worth more than £400 million, although in Wales and parts of central England the job will go to outsourcing company Capita.

Since the assessment regime for those on IB/ESA is continuous, this means that, less than a year from now, disabled people may have to undergo two deeply flawed assessments – within the same month – to get the essential financial support they need to live their lives.

Since ESA pays less than IB, it is not even certain that their living costs will be covered, even if they are among the lucky 12-13 per cent of claimants who are likely to be successful.

The aim of the change from Disability Living Allowance to the Personal Independence Payment (PIP) is to cut spending by 20 per cent over the next three years. The fraud rate, according to the DWP’s own figures, is less than 0.5 per cent. It is easy to deduce, therefore, that even if all the fraudulent claimants are taken out of the system (they won’t be), another 39 times as many honest claimants will unfairly lose their benefit.

The assessment system is likely to be based on that already in place for IB/ESA. This means about 500,000 people would be cut from the benefit roll due to arbitrary judgements based on a scheme that has already been proven to be flawed, target-driven, and – in many cases – fatal.

As if that isn’t bad enough, David Cameron has announced he wants to desecrate the NHS constitution, in order to allow the sale of millions of UK residents’ medical records to pharmaceutical companies without consent. This will allow those companies to develop new drugs – which is a good thing – which they are likely to sell back to the health service at sky-high prices – which is bad.

The information will be anonymous – he says – but it won’t be long until ways are found to trace it back to individual patients, who will then, for example, face exorbitant insurance premiums or be refused a mortgage. It is believed that consent for the sale of your records will be assumed unless you tell your GP otherwise.